So before I tell you about my Houston day, let me just say I did my day in Houston all wrong.  And I hope very much to have an opportunity for a Houston Do-Over day in the near future.  That being said, I did have a good adventure, met some cool people, looked at some pretty stuff, and managed to find a killer good burger.Houston was more of a layover than a destination on this trip.  No matter how I played around with the flight schedule I kept ending up with a really super long layover either in San Fransisco or Houston.  So I weighed my options and decided to make the layover into a stop off and spend a day exploring the City of Houston since I had never been there.My first mistake was in underestimating how flat-out HUGE that Houston is.  I found a hotel near to the airport and figured I could catch a cab/train/bus etc… into the City Center to do some exploring by foot.  This was not the greatest decision, but did strongly contribute to most of my ridiculous situations.I found a nice hotel near the airport and sprung for a Deluxe King room and I have to tell you being one person on a king size bed feels simply decadent.  Especially if you are short.  The staff at the hotel was really nice & helpful.  They had this sweet interactive map in the lobby that showed exactly how far away from downtown Houston we really were.  The surprise on the girls face when I said where I wanted to go should have been my first clue that this was a poorly executed adventure… but off I went anyhow.

My cab driver was a French Texan who wanted to talk family, food & travel.  In the 45 minutes it took to go from my hotel into Houston I got to learn about his immigration to Texas, his wife, his family, his kids, their education, jobs, and all about how he felt about Houston, Texas, and America in general.  Let me tell you, it was equally enlightening and hysterical.

My destination in Houston was Bayou Bend, a historic house, museum & garden featuring the private collection of the Hogg family.  My driver dropped me off at the main gate of the museum and left me with his business card for if/when I decided I wanted to get home by cab.  The visitors center was a very modern building with a lot of information about the history of the Hogg family and details of their philanthropic activities.  I would have spent more time at the center but the nice lady who worked there pointed out we were nearing the last call for admissions into the house and my time would be better spent there.

Traveling alone does give you opportunities to strike up conversations with some interesting people.  While at the house I ended up being accompanied by one of the volunteer guards who knew a lot of extra information about the house, family, work done at the house, and pieces of art in the house itself.  He was a really great source of information and added personality to the place.  I’m glad I got a chance to meet him, but I am sorry I didn’t think to go back & ask to take his picture.

Photography is not allowed in the main house, however the grounds were open to photographers.  I spent a few hours wandering around the gardens and just generally enjoying the beautiful setting and various vantage points of the house itself.

I finally decided to head out of the gardens towards what I hoped was downtown Houston, but wasn’t.  Instead I went east on Memorial Drive and ended up in the middle of Memorial Park.

Like Houston, Memorial Park looks manageable from various online map sources.  However, when you begin by underestimating how big Houston is to start with… you will be royally lost in the park itself.  My second bad decision was choosing to continue walking along Memorial Drive instead of turning north on Memorial Loop.  In all fairness I did not know that section of Memorial Loop runs smack into the Golf Course and restaurant in about half a mile or less.  However, I kept walking in hopes I would find either some directions, a map, a parking lot, a restaurant or a way out of the park.  What complicated the matter was the fact I had not thought to pack a granola bar or anything to drink.  So I found myself getting lost in a giant, hot, dry, dusty, “park”, surrounded by a bunch of people who were at the park to seriously work out.  I finally did get some semi-helpful directions from a runner who said the parking lot & entrance was “just around the corner”…. which it was… however after consulting a map (when I got back to the hotel because that’s where I left it…. obviously) the point where I asked for directions to the corner she was talking about was about a mile away.   Which was not as close as her “around the corner” led me to believe.  By the time I made it to the Tennis club, they were closing up and the vending machines were inside locked portions of the building.  I consulted with another nice sweaty person who offered to drop me off at the gas station outside the park but also pointed out my other option would be to keep going to the Golf Course in hopes the grill would still be open.As I rounded yet another ridiculously long curve I caught sight of the back of the Clubhouse… I could smell exhaust from the restaurant.  It smelt like burger drippings and hot dogs… I kid you not… it was heavenly.  As I walked thru the parking lot which was packed full of BMW’s, Audi’s, Land Rovers, and various other super nice cars it dawned on me that this was not your average burger joint.  This was a super classy burger joint attached to a VERY nice Country Club.  And I was a sweaty, pudgy, pasty white, out of shape Oregonian, with a camera.  I was going to be a LITTLE bit conspicuous.You know those scenes in the movie where the stranger walks into the establishment… and everyone turns around and looks at them?  Yeah, that was exactly how it happened.And I am not sure if it really was the best burger I’ve ever eaten… but at that moment it was the best burger I’ve ever eaten.
Ironically two of the women on my trip live in Houston and were both mortified that I spent the day alone wandering around the park.  So the next time I am in Houston I’ll be looking them up for some help seeing more of the Houston that is in the travel guide… and less of the Houston that made me think I was going to have heat stroke.
Moral of this story… go see Bayou Bend, its worth the trip!  Don’t attempt to walk thru Memorial Park.  Do rent a car when traveling in Houston, and for the love of all that is good… CARRY A MAP!

Lush lawn & walkway towards the house. 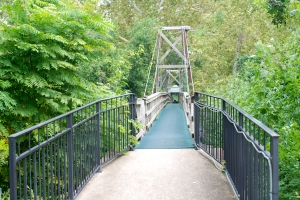 Bridge walkway access from the parking lot to the house. 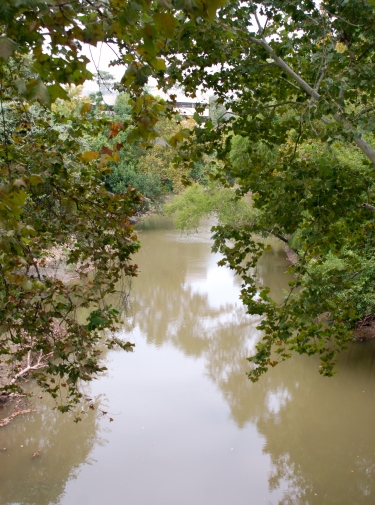 Easy to imagine lots of interesting things living in the Bayou below.

One of my favorite sculptures from the garden, peaceful & wise.

I don’t know what this building was originally, but now it houses the restroom, drinking fountains, lockers & some administration offices. 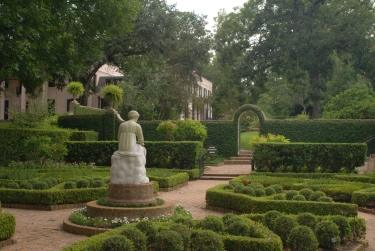 Side garden entrance to main house. 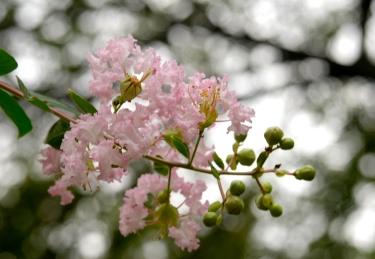 Another really beautiful flowering tree in the garden.  I love going to gardens where I can’t name the plants, it’s so exciting!

Small fountain looking towards the house. 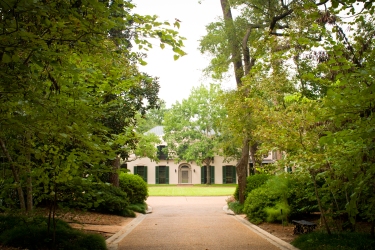 Another shot of the house from the main entrance. 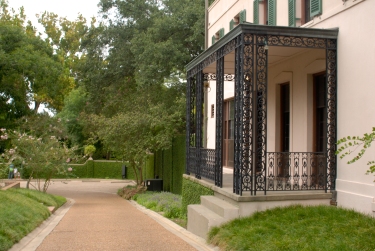 Walkway around the back side of the house & a really beautiful iron verandah.

Each section of garden had some sort of sculpture, all really beautifully done & nicely focused on. 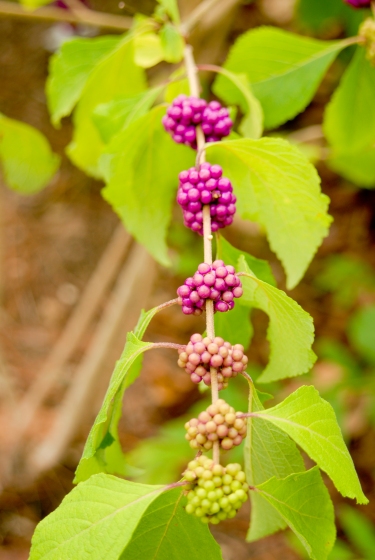 If anyone knows what kind of plant this is, please let me know. 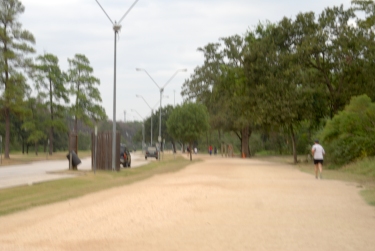 This last shot is a terrible picture, but shows a section of the pathway around Memorial Park.
by OrnJuly 17, 2013