Its been a Douglas Adams kind of week.

To start with was the KLCC Brewfest in Eugene last weekend where I sampled a glass of the PanGalacticGargleBlaster Beer from Falling Sky Brewery which is incidentally also from Eugene.  Bitter & hoppy… much like the drink described in HHG.

“the alcoholic equivalent of a mugging – expensive and bad for the head” and states that the effect of one “is like having your brain smashed out by a slice of lemon wrapped round a large gold brick”.

Then was the illustration Friday challenge.  Storm.  Which went through several revisions in my head and on paper before I landed on this with the aim of illustrating the following excerpt from So Long, and Thanks for All the Fish.

“And as he drove on, the rain clouds dragged down the sky after him for, though he did not know it, Rob McKenna was a Rain God. All he knew was that his working days were miserable and he had a succession of lousy holidays. All the clouds knew was that they loved him and wanted to be near him, to cherish him and to water him.” 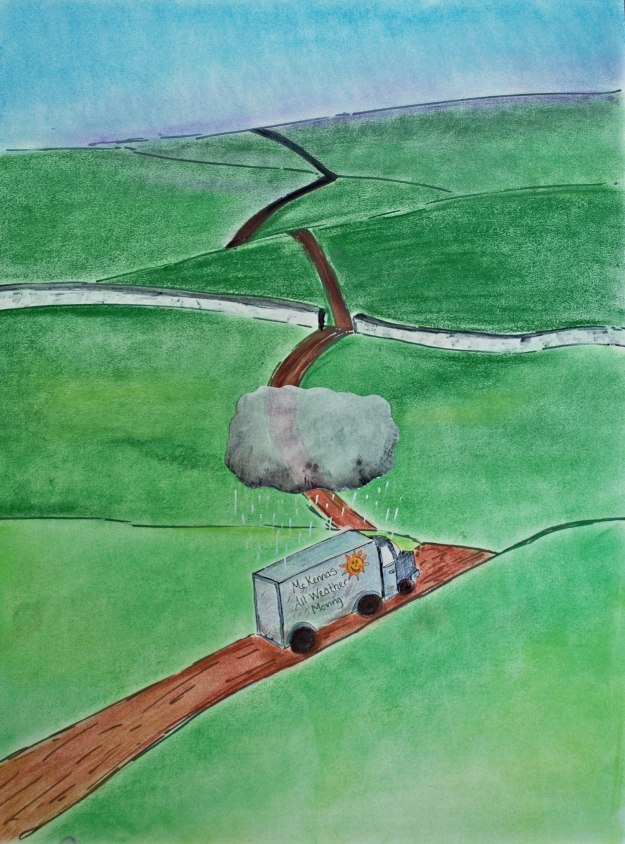 Incidentally the quote above came to mind while I was washing the dishes, thinking about Douglas Adams and listening to Weather With You by the Finn Brothers.

And if you dont know about Douglas, HHG, or Finn Brothers… I suggest you get enlightened quickly because you simply will never be a Hoopy Frood till you do.

Ok, as far as illustrations go this is a complete failure, so I didn’t send it to the IF site.  Cant honestly say you are illustrating something if you just write the words down in a different style.

But… my favorite collection of Myths is from Rudyard Kipling.  I got completely wrapped up in re-reading the Jungle Book collection and his poetry this week.  I also realized that I can NOT draw jungle animals from memory, and my house is sadly lacking in books with pictures of jungle animals.  Do’H!

So instead I went with watercolor & rusty calligraphy for the opening lines of The Law of the Jungle. 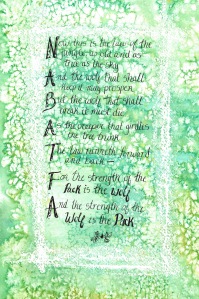 The Law of the Jungle

And in case you aren’t real familiar with Rudyard Kipling’s works may I suggest Toomai of the Elephants, and The White Seal… two of my absolute favorites that I really hope to play around with illustrating this weekend.

I will remember what I was, I am sick of rope and chain– I will remember my old strength and all my forest affairs. I will not sell my back to man for a bundle of sugar-cane: I will go out to my own kind, and the wood-folk in their lairs.

I will go out until the day, until the morning break– Out to the wind’s untainted kiss, the water’s clean caress; I will forget my ankle-ring and snap my picket stake. I will revisit my lost loves, and playmates masterless!

– Opening Poetry from Toomai of the Elephants

From where I stand the Ocean both inspires and intimidates me.  While I am safely at home I can hear its roar which reminds me of its power, its boundaries, and its constancy.  On days where I need a break it is there for me to travel along.  It coughs up treasures for me to find, shells, spray paint cans, seaweed.

The story of HyBrasil is one of my favorite Irish stories.  Much like that of Atlantis, it is an Island with either a city or monastery or castle on it (depending on the version you hear) that lies beneath the waves.  It has been woven into Irish folk-lore since man first sailed away from the shore.  The version I am most familiar with is that of Saint Brendan the Navigator who set sail in a leather boat, and found the island after hearing of it from a holy man, and following tips from a bird on Paradise Island.  I like to imagine this island truly does exist and it is still sitting on a shoal under the ocean.  Once upon a time it was visible and occupied but that was when the tides and currents traveled a different route.  Nowadays the only Monks inhabiting it are of the Seal variety. 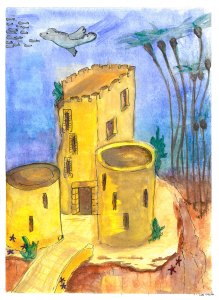 In addition to letting my imagination loose on the project I re-discovered how much I enjoy watercolors despite the fact its been over a decade since I last played with them.  I also realized how much I can use some practice at watercolors!  Oh well, the goal was to have fun, which I did. 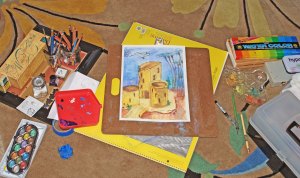 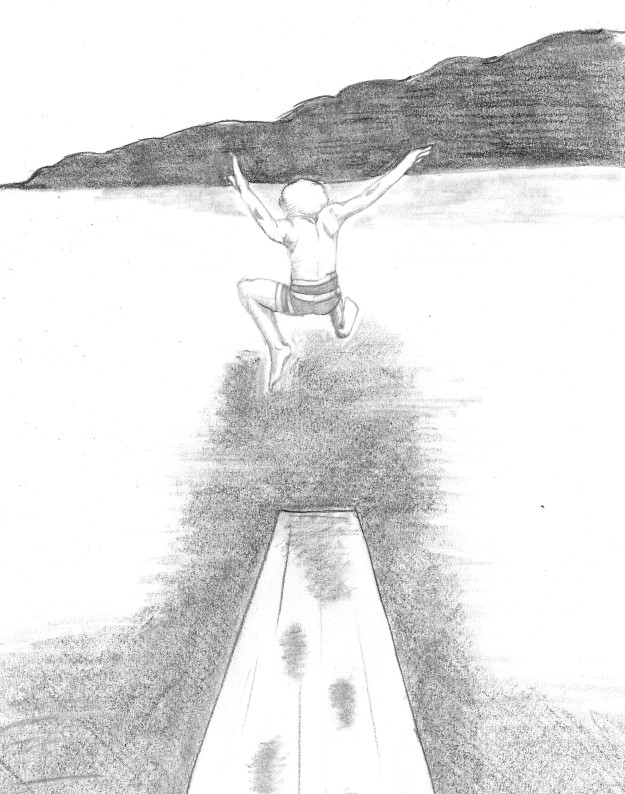 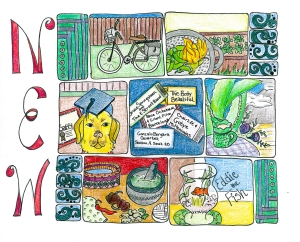 Hey, whats up?  Whats new?  Isn’t that what you say to friends?  So looking backward at the new things I experienced in 2012 here is what New means to me.  In particular what was new in 2012.

Lots of new music –  A Silent Films & the Band Barcelona were the saving grace to the Blue October Concert my sister and I attended, these two really great bands were brand new to me and I promptly went home and downloaded their albums.  Rebecca Ferguson is my girl crush du jour, an amazing voice that makes me think maybe Aretha Franklin and Macy Grey had a baby who listened to a lot of Tracy Chapman.  I also fell in love with Gotye… and I don’t mean the one pop song that saturated every radiostation… I mean the guy’s whole stinking catalog.  Then watching him perform live at McMenamins Edgefield on the Lawn with a Ruby Red in hand my family around me watching some of the coolest original graphic art work paired with his music sealed the deal.  Oh, and how on earth could I leave out my little Honey Honey Band?  With lyrics to their new song Thin Line “‘Cause I want whiskey when I’m sick, And a man when I’m well, But it’s nice to have them both sometimes, When I feel like raising hell” which resounded in a big way with this lil’ whiskey lovin’ girl.

New Experiences – The biggest of which was the trip to Mexico.  On a whim I signed up for a week-long cooking class deep in Mexico… on my own!  On the way down I spent the day in Houston, which was not long enough to see all Huston… but was enough time for me to get stuck in the barren and scorched patch of dirt they call a park.  I am sorry Texas people… but y’all don’t know what a park is till you’ve been to Oregon.  Parks have green in them, and not just at the golf course.  Mexico was a learning experience every single day, from new cooking skills, to new ways to think about food, to learning history, soaking in the scenery, and meeting new people.  I also got to drink Pulque on a hacienda tour while in Mexico and toured the underground pyramid in Cholula.  Two very uniquely new experiences.

New Four Legged Friends – Looking back on my facebook activity profile I’ve noticed a strong trend towards the dog-centric aspect of my life. From our very long babysitting of Buddy & Holly the Beagle Babies, to mega wrestling matches with Burton & Buddy, loudmouth contests with Haus, to spa weekends with sweet miss Daisy, to a chaotic weekend with Kona, the last year introduced us to lots of new dog-friends and gave my carpet a run for its money.  Saffy and I also completed basic obedience training for the second time with our new teacher Dina of Surf City Dog Training and it made a huge difference.  Next year I hope to do level 2 training with Dina and plan more dog-days where Saffy and I just do things that are fun for her… hikes, swims, beach, dog park visits.

New Skills – Once again my Mexico experience weighs in heavily with beefed up skills in the kitchen including but not limited to: stuffing chiles, making tortillas, de-stickering Nopales pads, and having a better grasp on making Mexican sauces and cooking beans.  I think overall it taught me more about using ingredients I’m familiar with in a completely new way, and that in itself has been very fun.  Also in the culinary department is more experience cooking for friends with dietary restrictions.  And since I already consider cooking for my friends a special way of saying “I Love You”, I now feel I can say it louder by feeding them things that dont give them tummy troubles.  In the studio its hard to say one new skill I learned, but with the help of some new tools my existing skills have improved.  I think my finished jewelery is starting to look like the real thing!  Er… most of the time!  And personally I made it a goal to schedule time with my friends and only missed a couple play-dates due to ill-timed colds & coughs.  It has been really wonderful getting to connect with my friends and to at least let them know I WANT to spend time with them.  Sounds silly, but it became a very important part of my year and a new habit I will try to hang on to.

There were so many other things that were new to Orn-land this last year and I am so happy to look back on my calendars and remember the fun times the travel and all the NEW that filled my hours.  I am already plotting and planning for what New things I can do in 2013!

How about you?  What did you do that was new to you?  Do you have plans to do something new in 2013? 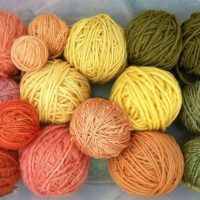